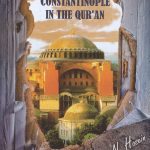 Constantinople in The Qur’an

In consequence of a mysterious decision taken by Mustafa Kamal’s secular Republic of Turkey to not only change the city’s name, but to also take steps that eventually ensured that the name, Constantinople, would no longer be used, this writer had to retrieve the name ‘Constantinople’ from the museums of history in order for this book to be writer. Why did the secular Turkish leader change the name of the city? Why did the name ‘Constantinople’ have to suffer that mysterious fate? This book brings clarity to that subject.

This writer is convinced that the mysterious disappearance of the name ‘Constantinople’ from modern-day vocabulary and discourse is directly linked to the status and role of the city in both Islamic and Christian eschatology.

“Shaykh Imran has wittingly named his publication as such in order to remind and educate Muslims and Christians alike of the prediction in the Qur’ān concerning that particular region where Constantinople was located which was fulfilled during the very lifetime of Sayyidunā Prophet Muhammad (peace be upon him) and what would subsequently come to pass in the future. Moreover, Shaykh Imran also sheds light on the predictions in the hadīth literature that directly relate to the city of Constantinople that would eventually unfold during what is termed as Ākhir al-Zamān, namely, End-time.”