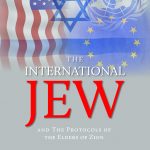 And The Protocols of The Elders of Zion

What is not so well known is that Ford devoted years of his life and a substantial part of his fortune to awakening the American people to the enemies of the nation. Ford had become convinced that there was an organized, dangerous, largely secret, and incredibly powerful menace to America, almost completely Jewish at its highest levels, and he was determined to do something about it. Thus, 1920 marked the beginning of the publication of Fordâ€™s research series in The Dearborn Independent, the Ford Motor Companyâ€™s weekly magazine. These articles were eventually collected in book form under the title The International Jew. When first published, more than 10 million copies were sold in the United StatesÂ  alone. It was translated into sixteen LANGUAGEs and distributed by the millions in Europe, South America and the Middle East, making it one of the greatest bestsellers of all time.

Yet today this book is almost impossible to find. You will not be able to buy it in your local bookstore, nor check it out at your local library. The truth is that in the so called â€œdemocratic, pluralistâ€ America this book has been nakedly suppressed.

Â Â Â  The International Jew is relevant to all of us, even if Henry Ford addressed this question to the Americans. Its insights into the roots of todayâ€™s political situation is astounding and prophetic. The International Jew and the Zionist movement have assumed gigantic proportions affecting the peace of the world.

Be the first to review “THE INTERNATIONAL JEW” Cancel reply