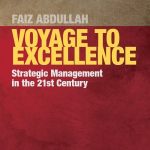 Strategic Management in the 21st Century

What is strategy and how does it relate to management? Is strategic planning a bane or a boon to management and how do firms gain competitive advantage? But is competition even relevant in this day and age? Is Blue Ocean Strategy over-hyped and how do doctrines of warfare relate to strategy for companies? This book explores these and other questions and gives a concise but succinct analysis of the classic diagnostic and prognostic tools of strategy. While covering the main ground of strategic management principles including the classic models used in the 20th century, it also offers alternative and critical views from the perspective of the 21st century. In this voyage to excellence in strategy, the book ends with a chapter on the effects of the Fourth Industrial Revolution and shares insights on how practitioners of strategic management can harness them.

Faiz Abdullah is the Founding Dean and Professor of the Selangor Business School, and a senior adviser to the Minister of Economic Affairs. He graduated with First Class Honours in LLB and was recipient of the Royal Gold Medallion of the International Islamic University in 1989. His first degree was in English Literature from the University of Malaya. He holds an MBA from the University of Southern Queensland and a PhD in Business Law from the Putra Business School.

Faiz has authored three other books. The first, The Province of Shari‘ah Determined—Fundamental Rethink of the Shari‘ah is a tour de force in the discourse on Shari‘ah where Faiz argues that Shari‘ah is not cast in stone and should be taken out of the legalistic and fiqh-centric obsession to its culturally rich context. His second book, Wars of Jurisprudence—Clash between Contractual Justice and Freedom of Contract breaks new ground in legal scholarship by transferring cold and clinical rules of contract law into the context of modernity and justice. His third book, Propelling Selangor’s Transformation into a Regional Smart State, is, as the title suggests, a monograph on the nation’s largest economy and its change trajectory into a leading state in Southeast Asia.

Be the first to review “Voyage to Excellence” Cancel reply