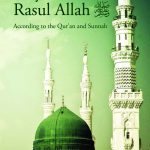 According to the Qur’an and Sunnah

Prayer of Rasulllah is an effort to document the prayer of Prophet Muhammad  according to the Hanafi Madhab. The intention is to make it an easy reading for those who follow the Hanafi creed. This book presents in one place all the significant Ahadith that have been used by the Hanafi fuqaha to legislate the form as well as the contents of every move in Prayer. The authenticity of these legislations was certainly derived from established facts, i.e., strict adherance to the express instructions and practical demonstrations of the Prophet. In no way does this book imply or suggest that the practices of prayer in other Madhahib are not based on Qur’an and Sunnah. There is a general acceptance among the Great Majority (Sawadul A’zam) of Muslims that the legislations of the fuqaha of the four Madhahib were without any blemish. The minor differences between the Madhahib that we find here and there are inconsequential. To emphasize this point, the authors, while explaining how prayer is performed in the Hanafi Madhab, have included in the write-up references to existence of other Ahadith where the Propet  prayed differently than the Hanafi Madhab. Besides the actions of performing individual prayer, this book also addresses important topics in the areas of: Performing Dua after the end of prayer; Documenting what external factors breaks prayer; The timing of prayers; The daily sunnah prayers; How to perform Witr and Qunut in prayer; Combining prayers; Praying missed prayers (Qada prayer); Praying behind the Imam in congregational prayer with related actions pertaining to saying Ameen, reciting surah al-Fatihah or other surahs, correcting Imam and performing missed Rakah; Performing Sajda Sahw; Performing Adhan and Iqama in prayer; Praying Salatul Tasbih, and; Prayer of woman.

Abdul Quayyum is a former Vice President of an information technology consulting company in U.S.A. His father, the late Abdul Mannan was a District and Sessions Judge in the 50’s. Shamsul Ulema Maulana Safiullah (may Allah be merciful with him), a renowned teacher of Islam at the Kolkata Aliya Madrasa and fondly known to his spiritual disciples as Dadaji-was his maternal grandfather. Mr. Abdul

Quayyum got his masters degree in Economics and MBA from Boston. He taught undergraduate students in Economics, Statistics and Management Information Systems. Since retiring he authored the book on The Concept of Bid’ah in Islam in the light of the Qur’an and Sunnah.

Ziaul Huq Qutubuddin is a former Visiting Professor of Islamic Studies at South-East University, Dhaka, Bangladesh. Son of Shamsul Ulema Maulana Safiullah (may Allah be merciful with him) and brother of Fakhrul Mohaddesin Maulana Abdul Ghafoor (may Allah be merciful with him), Ziaul Huq Qutubuddin joined the Pakistan Taxation Service in 1963. He retired as member (Taxation), National Board of Revenue, Government of Bangladesh. Then he served as Member of the Bangladesh Public Service Commission. He is one of the scholars on Islam, Quran and Sufism. He co-authored the book on The Concept of Bid’ah in Islam in the light of the Qur’an and Sunnah. He also leads a group on Quranic discussions and his lectures, articles and video on Quran and Islamic topics are available on https://qquranstudycircle.org