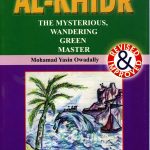 Who is Al-Khidr? Al-Khidr, the Green Master, is the mysterious sage endowed with immortality and who is said to have entered into conversation with wandering saints and sufis to impart to them some of his God-given sciences. Allah reveals some of the higher sciences to him, which could not be understood by even the prophet Musa (a.s).

Al-Khidr was the vizier of king Sikandar and the anonymous guide to Musa (a.s) as mentioned in the holy Quran (18: 64-81). He again appeared in the funeral of the holy Prophet (s.a.w). Al-Khidr is predicted by Muhammad (s.a.w) to challenge Dajjal at the end of time. Prophet (s.a.w) said: “It may be that one of those who saw me and heard my speech shall meet Dajjal.”

Al-Khidr is the unseen guide of the mystics and he is still alive in the flesh! He is still to be seen in holy places. Al-Khidr, the green man, is the patron travelers in Turkish folklore. In Iraq he is revered as the patron saint of water. In Sri Lanka, some hamlets in the vicinity of Adam’s peak are listed as receiving the patronage of Al-Khidr. The Iranian Island, Abadan, is known as Al-Khidr’s Island. This mysterious person is also well known in Malaysia and in Mauritius.

Is Al-Khidr really alive? Is he immortal? Is he a man? Is there any unseen world where Al-Khidr rules? Why some of his actions contradicted the Shari’ah of prophet Musa (a.s)?

These and many more questions are answered in this book. Besides unraveling traditions and folklore, the author presents colorful anecdotes, episodes, sketches and encounters by sufis with Al-Khidr.

Be the first to review “Al-Khidr” Cancel reply