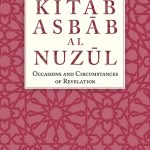 Occasions and Circumstances of Revelation

Asbāb al-Nuzūl or occasions and circumstances for the revelations; refers to a field of study and genre of literature devoted to recounting the circumstances of the Prophet Muhammad SAW and his followers when particular verses from the Qur’an were revealed. Legal scholars regard this study as of great importance, on the principle that sound understanding of the revelation proceeds from knowing the reasons Allah revealed the Qur’an and how the Prophet Muhammad SAW applied the revelation when he received it. Asbāb al-Nuzūl sheds light on the ayah, it enlightens the tafsir and application of the ayah.

The earliest and the most important work in this genre is undoubtedly Kitāb Asbāb al-Nuzūl (Book of Occasions and Circumstances of revelation) of Alī ibn Ahmad al-Wāhidī. Al-Wāhidī mentions occasions of about 570 verses out of 6236 verses of the Qur’an. Wāhidī’s work is not only the first attempt to collect all the material regarding the occasions of revelation in one single volume, but it is also the standard upon which all subsequent works were based.

Alī ibn Ahmad al-Wāhidī (d. 1075 CE) was born in the city of Nishapur and he died there at an advanced age. He was a poet, philologist, grammarian and Qur’anic commentator. In fact, He was considered a great commentator of the Qur’an of his time.

Among his teachers was the famous Qur’anic commentator al-Thalabi (d. 1036 CE) and Wāhidī enjoyed the support and trust of the Seljuq vizier Nizam al-Mulk.